It’s now been almost a week since  AMC aired the final episode of “Breaking Bad” I am a relative new comer to the series but I did enjoy the finale. You see the notion of a mild mannered chemistry teacher transforming to a “bad ass” had little appeal to me initially but after watching several episodes I found the premise  a bit familiar.     Jean Claude, the big Bombay cat, is usually mild-mannered but he does have his episodes of “breaking bad.”   For instance yesterday as I was opening the door to get the newspapers – he  stormed out  into the front yard  and refused to come back in when requested.  Yes, he eventually returned  but on his time – not mine.   He also will get in your face to demand to be fed.  Knock on the door when he wants to be let back in house and knock down trash can in my office  when angry.   Maybe AMC should consider a sequel. 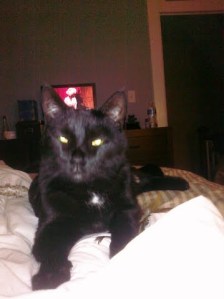